Nick Edwards is a cartoonist and illustrator from London who is currently studying illustration in Brighton. He has been devising comics and cartoons from a very early age. 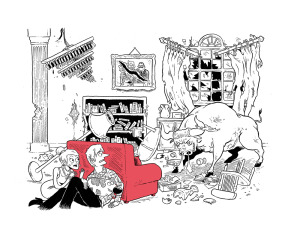 In 2009 he won the Under 30 Cartoonist of the Year and we promptly asked him to do a sketch for our Castleacre caption competition – which inspired some very entertaining and colourful responses. Nick’s first comic book Dinopopolous will be published by Blank Slate Books later this year.